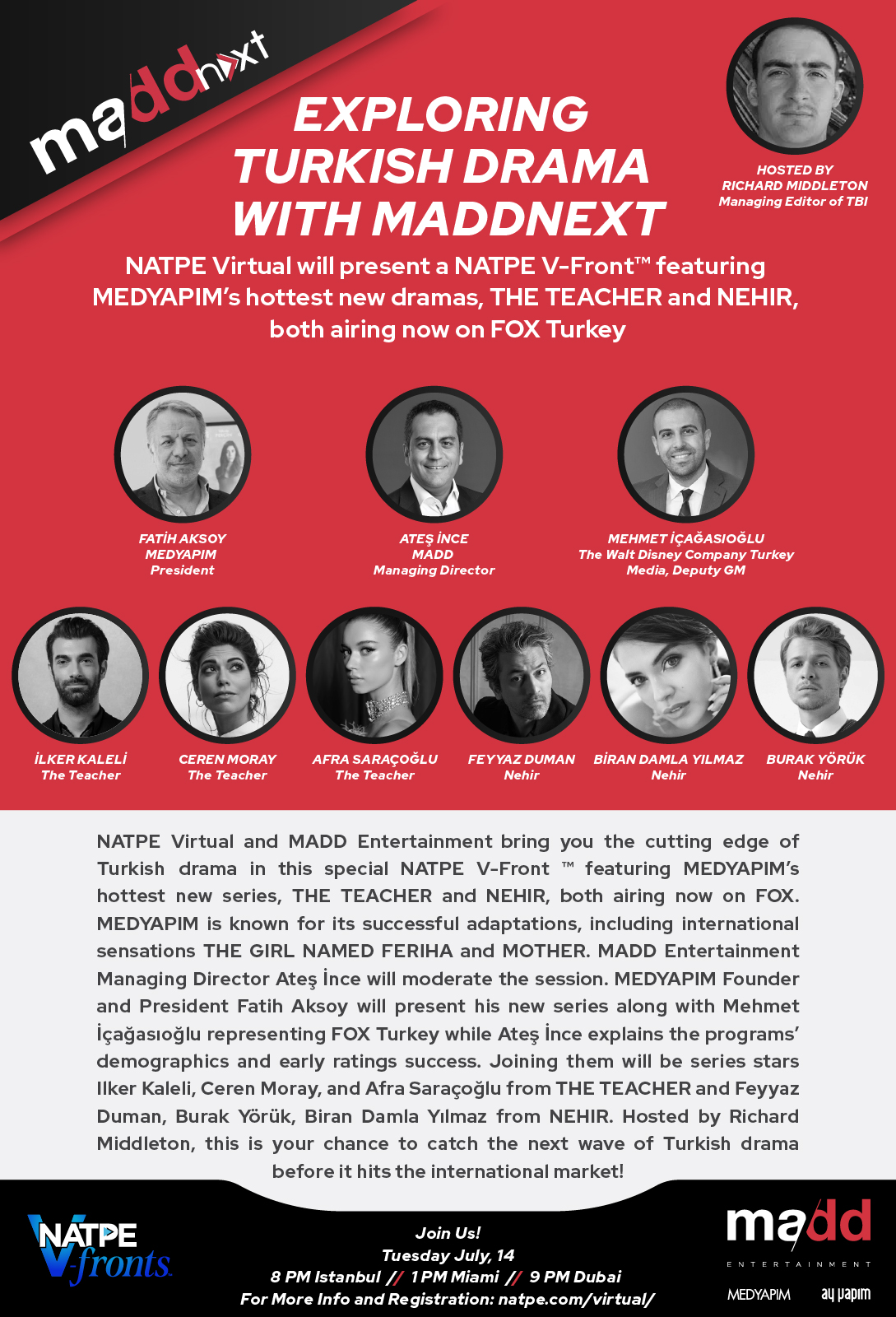 As industries around the world are trying to understand and define their next best steps in a post-pandemic era, we attended a virtual event exploring Turkish drama with MADDNEXT, a premier drama distribution company formed by collaboration between production houses Medyapim and Ay Yapim. The two compelling promo reels presented at the event indicate a shift in the traditional Turkish storytelling, which is more famous for showcasing love stories that must triumph within interesting circumstances rife with obstacles, tensions, social dissonance and more while the human elements of the characters get captured in artistic and realistic ways against the gorgeous locales of Turkey.

Medyapim and Ay Yapim combined produce more than 50% of the content coming out of the Turkish industry, and their distribution strategies are watched by the free tv markets. Hosted by NATPE, a US based global content association and professional membership organization, the event presented two dizis, The Teacher (“Ogretmen”) and Nehir (“Baraj”), that are the results of collaboration between Medyapim and FOX TV in Turkey. The panel included protagonists from the two shows, Medyapim President Fatih Aksoy, FOX Turkey Executive Mehmet Icagasioglu and MADD Entertainment Managing Director Ates Ince, who also served as the moderator. 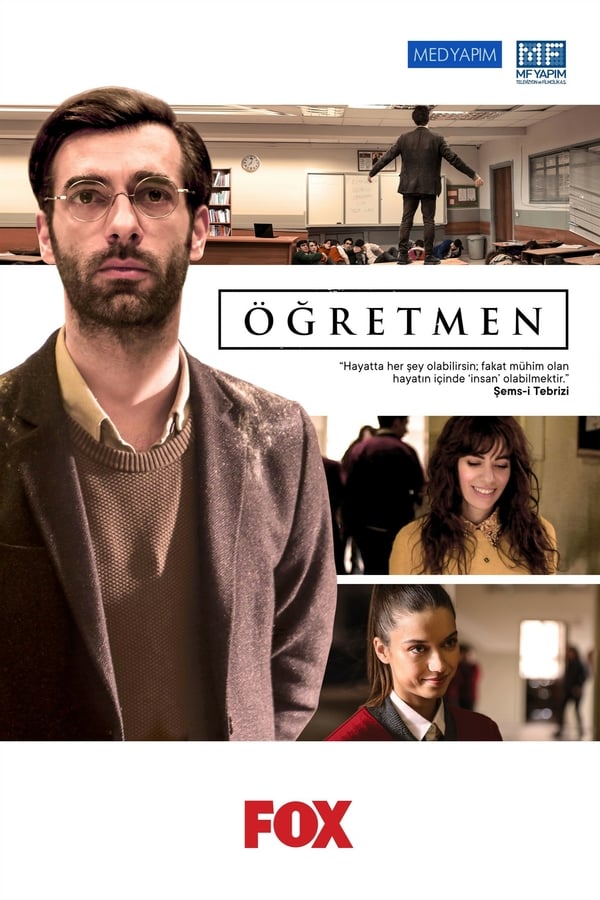 Akif is a quiet, introverted physics teacher at a high school, who is engaged to be married with plans to continue his mild lifestyle. Major changes come his way when his fiancé ends up in a coma after an accident and eventually wakes up with no memory of him. Struggling with a grave disease himself and coinciding with the suicide of a student Rüya, who was an award-winning athlete who allegedly cheated in the latest athletic competition and is subjected to verbal harassment at school, Akif goes over the edge and puts an elaborate plan into motion designed to ‘teach’ the bullies in the school some important lessons about life.

It is a subject matter that is very relevant in today’s age of prolific social media usage and cyber bullying, and it is interesting that content markets all across the world are highlighting the theme in creative ways, with much of the productions designed to create self-awareness among the youth about the dangers and costs of such behavior.

Adapted from the award-winning series Mr. Hiiragi’s Homeroom from Nippon TV, the show only aired 4 episodes before the lock down, with record ratings in the AB Group. The production is going back to the sets this week, with plans to produce 36 Turkish length episodes (~2.25 hours), creating opportunities for international sales of 100+ episodes (at ~45 min each). You can find more information about the production here: https://www.madd.tv/the-teacher 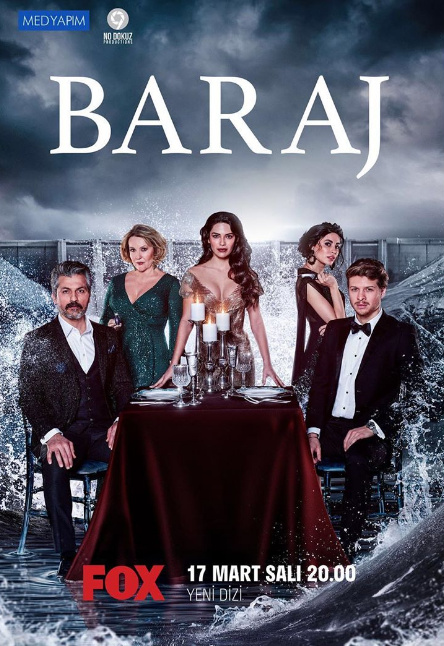 Nehir and Nazim, a foreman at a construction site for a dam, have been online ‘dating’ for some time. Both have issues with their self-image and take refuge in the love they find with each other within the anonymous web. Nehir has been brought up by con artists and has been trained to swindle people out of their wedding gold. She hates her life and is looking for a redeeming path she can live with. Nazim’s face has been disfigured from an accident, and he has become a social recluse. His one joy is his conversations with Nehir, with whom he has fallen deeply in love. Tarik, a pretty, city boy and famed womanizer, comes to work at the dam under Nazim’s supervision. At her rope’s end, Nehir wants a different life, and shares her real identity and picture with Nazim, expressing a desire to meet him. Panicked, Nazim sends her a photo of Tarik, and she is enamored. She shows up at the dam, where Nazim convinces Tarik to play the role of Nazim. Tarik falls in love with Nehir.

Set against the unusual locale of a dam construction site, the tale is also adapted from a Japanese series which in turn is based on the famous French play Cyrano de Bergerac. With the typical tensions of a love triangle, incorporating modern elements like online dating, the show explores the concept whether love goes beyond beauty? Who will Nehir choose?

The show has only aired 2 episodes so far, with ratings that went far beyond expectations. Filming will restart later this week. For more on the production and trailer, you can go here: https://www.madd.tv/baraj

Through their continued collaboration that include productions such as Mother (Anne), Woman (Kadin), My Daughter (Kizim), The Good Doctor (Mucize Doktor), FOX and Medyapim are now making a conscious choice to create more contemporary stories designed to attract younger audiences, whereas the traditional narratives had cornered the 35+ age category with primarily female viewers. They also aim to sell at least 90% of their content to international markets, which also contributes to how the storytelling is shaped for free tv. The profitability from international sales help invest in better and richer stories to come out of Turkey. Within the contemporary themes, however, local producers walk the fine balance of keeping within social messages that can resonate with local audiences as well.

This strategy has paid off for the pair. There are 7 channels in Turkey that compete for market share, with minimal share gap between the players. A few years ago FOX was in 5th or 6th place, but since the Medyapim collaboration and a focused strategy, FOX has been the #1 channel with a significant lead for the last 3 years. The audience sees this in the style of content as well, which are young, fresh and modern in their themes.

It was a very interesting session that included some big wigs from the industry. The innovative approaches to the storytelling, now coupled with innovative ways of showcasing them for distribution, ushers in a new age in digital media. What would have been a full episode screening during a physical meeting was condensed to a 5 minute reel on each show. With the shifts in the kinds of stories being told comes the excitement from the cast at being a part of such layered narratives.

As part of the international audience for Turkish drama, we can attest to the growing excitement among English speaking audiences for the new ways Turkish drama is trying to reach new markets with their compelling stories. We cannot wait for more of the same!