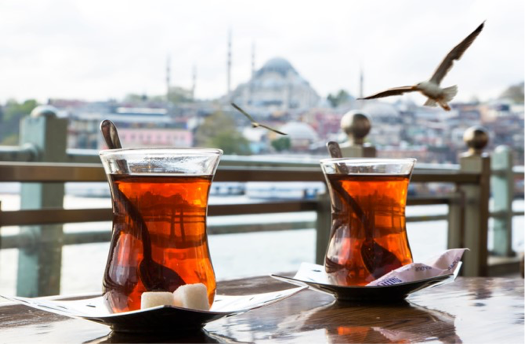 Having heard a lot about Turkish coffee, I assumed coffee to be the national drink of Turkey. Being unfamiliar with the country of Turkey until a few months ago, I was surprised to discover this assumption is totally wrong. Turkish people love drinking tea. From sunrise to sunset, there is never a bad time to drink tea in Turkey. It is consumed all day long, starting with breakfast and continuing until bedtime. The practice is firmly ingrained in the culture as a social experience, a gesture of friendship, and a sign of hospitality. Turks even beat the British in the daily consumption of tea.

We do not know exactly when and how mankind started to drink tea. The first record of using tea as a beverage comes from China, and dates back to the 10th Century BC. Europeans learned about tea in 1589, when a Venetian author credited the lengthy lives of Asians to their drinking of tea. In the 16th Century, Portuguese traders began importing tea, and it became very fashionable in aristocratic circles and royal courts. In Great Britain, tea became even more in vogue and at the end of the 17th Century, alcohol consumption had declined due to the drinking of tea. In the 19th Century, the Chinese trading in tea with Western nations had spread, and tea as an industry started to appear widely in Europe and in America. 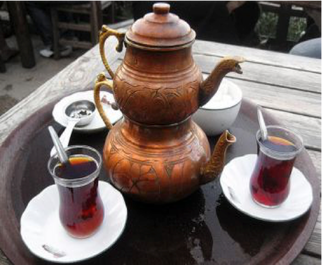 Turkish tea (“çay”, pronounced like “chai”), is the most popular beverage in Turkey, North Africa, the Middle East, and the Horn of Africa. It is a black tea which is grown on the eastern coast of the Black Sea. Many tea plantations are located around the town of Rize, which is why Turks call this tea “Rize Tea”.

It is prepared in two special kettles (in Turkish “çaydanlık”). Water is boiled in the larger lower kettle, some water is used to fill the smaller kettle on top, and several spoons of loose tea leaves are put in it too. This makes a very strong tea but when served, the remaining water is used to dilute the tea to the taste of the drinker. 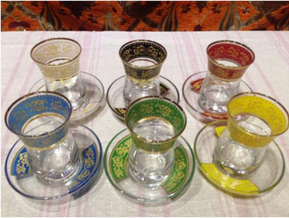 Turks use special curved, see-through tea glasses with a small plate underneath to make it easier to carry and serve. Since the steeped tea is on the top pot, you need to be careful with the amount you pour into the glass. Half of a glass is very strong (in Turkish, koyu or demli), a quarter of a glass is considered normal, and less is light (in Turkish, açık). Then water is added to fill the rest of the glass, leaving space at the top to help the drinker take a sip without spilling or burning their fingers. Traditional Turkish tea glasses have no handle, so you need to hold the glass from the top using your thumb and index finger.

If you have guests, use a little more tea and water than required. The host is supposed to supply tea as long as the guests want to drink it. In Turkish culture you just cannot say, “Sorry, we don’t have any tea left!” This is simply not done. In case you are the guest, keep the famous Turkish hospitality in mind. Just like any other treat, the host will insist you have one more. To prevent this, you can apply the equally traditional way and put your tea spoon on top of your tea glass when you finish your tea. This means, “No thank you!”

On most busy streets, there is a familiar sight. A young boy carrying a silver tray hurries through the crowd to deliver small tulip shaped glasses filled with black tea. The fragrant liquid is not traditionally drunk with milk or lemon, only sugar cubes, enough to make a very sweet drink or to the taste of the drinker. Shopkeepers often offer customers a Turkish tea as a sign of friendship and hospitality. Anyone browsing through shops need only to say “yes” when being offered tea to immediately glimpse one of Turkey’s strong traditions.

In every home and workplace, a pot of tea will always be brewing and ready to drink or to offer to guests. Workplaces are required by law to allow at least two tea breaks within the working day. Offering a glass of tea to a newcomer or guest is customary, and refusal is unheard of.

The Turkish Tea House and Garden 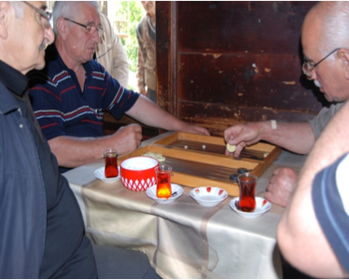 A frequent sight in most towns and villages is the Turkish tea garden called a Çay Bahceşi. Friends and families will gather there to discuss their lives and enjoy each other’s company while sipping slowly on tea. Although everyone goes to the tea garden, it is not often that a woman will be spotted in a Turkish teahouse. Predominately a male environment, there is a teahouse in every village because it is just as important as the local market. Their wives and girlfriends do not accompany them because the men gather around the table to play board games for hours while sipping on a variety of tea flavors.

If you are traveling around Turkey as a tourist, or even if you are one of the locals, there is nothing like reading the morning paper or your favorite book under a vine-covered trellis and sipping a warm glass of tea. Tea gardens are simple, leisurely places where old friends meet, young people discretely flirt, and many games of backgammon are played over glasses of tea. There are lovely tea gardens along the Bosphorus, in the narrow and winding streets of old Istanbul, and in the tourist cities along the Aegean.

Turkey is among the world’s top five tea-growing countries, producing 6-10% of the world’s tea, much of it consumed domestically. Turkey’s tea-growing region stretches along the Northeast coast of the Black Sea, from the Georgian border through the city of Rize. The heart of tea production in Turkey happens in Rize. Fertile soil, frequent rainfall, an ideal climate, and weather temperatures all combine to form tea leaves carefully nurtured until ready for picking. After picking, the leaves are sent to the factories to be crushed, packaged, and shipped to the rest of Turkey and other countries around the world. Turkey is third in tea consumption in the world. However, Turkey consumes the most tea if the amount is measured in proportion to the population.

Many brands and flavors of tea are stacked high on supermarkets shelves but the most well-known and popular is the government-owned Çaykur brand. In Rize, the Çaykur tea garden is a popular place to meet socially with friends and family. The company employs 16,500 people and produces more than 6,600 tons of tea per day.

Oralet is a fruit tea with flavors such as orange, apple, lemon, and cherry. Rather than using traditional tea leaves, the mixture consistency looks like sprinkles used for decorating cakes. It has an unusual bright color, a fruity taste, and generally does not need additional sugar thanks to its sweetness. Typically sold at the local weekly markets, this tea type appeals to tourists more than Turks. Turkish herbal tea is available, but the truth is, Turks seldom drink it. According to them, the black, sweet variety is the only way to drink tea like a Turk!

Health studies in the Netherlands showed that black tea helps to regulate blood vessels and the heart, leading to a lesser chance of stroke or heart attack. The flavonoids in black tea help keep cholesterol down, which can stabilize metabolism and lead to a reduced risk of diabetes. Tea has greater antioxidant power than many plants, and its flavonoids may act as antioxidants. The tea plant also contains fluoride naturally, which makes tooth enamel stronger and more resistant to acids, with positive benefits for dental health. Turkish tea is natural and healthy since no pesticides are used in the growing, and no additives are part of the production process or used in tea houses.

When you are in Turkey, accept an invitation to enjoy a glass of Turkish tea. You will experience the tea culture, a wonderful social experience, and the biggest sign of hospitality a Turk will ever make! 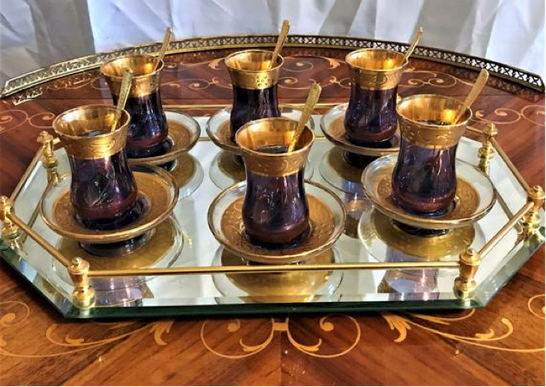 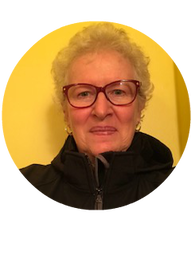 Mary Bloyd  is a retired corporate manager, living in Centerville, Ohio with her husband, Jon. A mother of one daughter and grandmother of four beautiful children, she loves cooking for her family and friends. Taught by a professional chef how to use spices and herbs, make stocks and mother sauces, she developed a curiosity about all manner of food and cuisine. A dedicated colorist, she is also a journal-keeper, writer of short stories and poetry, and loves to travel.