This article is Part Three of a seven-part series exploring the cuisine of the seven regions of Turkey. Anatolia is full of the remnants of countless civilizations that have lived in these lands over hundreds of years. Wherever you turn, there will be signs of yet another civilization that once dominated with their own unique culture and belief system. Considered the heartland of Turkey, in this article we will look at the regional specialties that remain part of the culture and tradition of the Central Anatolia Region (in Turkish, Iç Anadolu Bölgesi ).

It is the second largest region of Turkey after the Eastern Anatolia Region. Called a “plateau”, it is actually more diverse than this definition implies. Stretching inland from the Aegean Region, it occupies the area between two parallel mountain ranges. The Taurus Mountains in the south along the Mediterranean coast, and the Pontic Mountains in the north along the coast of the Black Sea. These mountainous regions form the eastern highlands and include the highest mountain peak in Turkey, Mount Ararat. 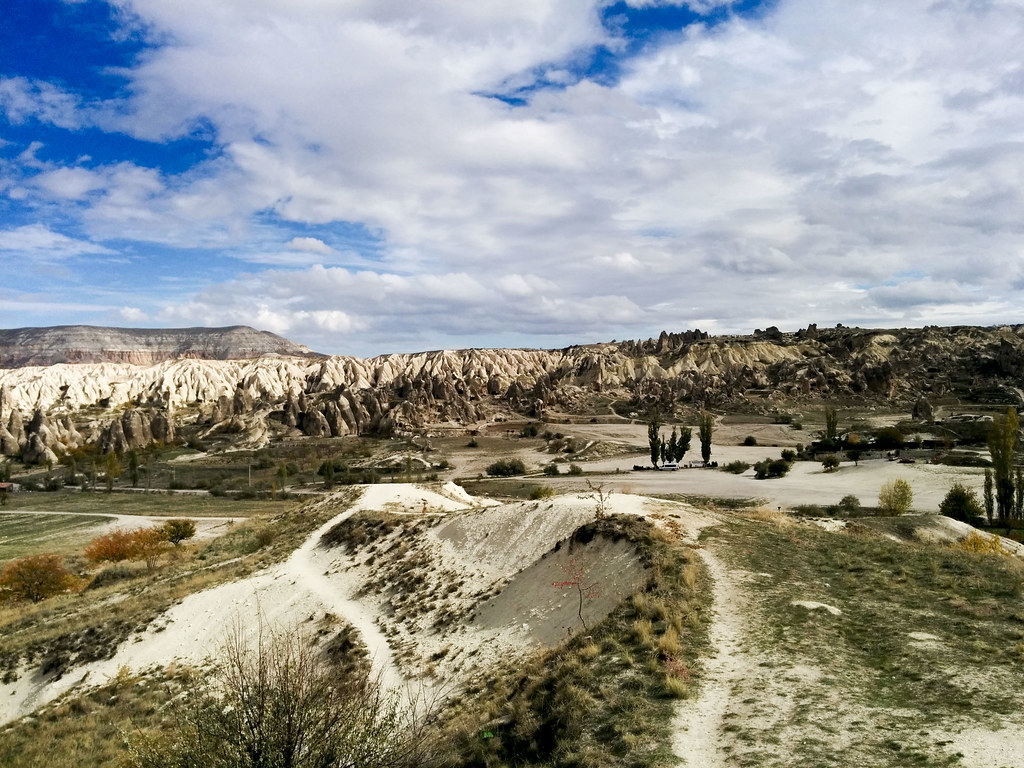 Summers are hotter and drier than in the rest of Anatolia, but colder and wetter in the winter. The area experiences very cold winters with an average temperature of freezing. Frequent heavy and lingering snowfalls can isolate villages in the region.

Agriculture is restricted to the areas surrounding neighboring rivers, where the valleys are sufficiently wide enough to allow for cultivation. Irrigation is practiced where water is available. However, the rivers run so deep that it is difficult to raise water up to the lands being used for agriculture and cultivation. The most important crops grown in this region are wheat and barley. As rainfall is limited, the yields can be very irregular, and these crops fail in the years of drought. Despite these severe conditions, one-third of the wheat grown in Turkey comes from the Central Anatolia Region.

Other important crops are potatoes, beans, chickpeas and lentils. Some areas are cultivated with orchards and vineyards, but for the most part the land is used for grazing. Some larger animals live in the highlands (wolf, fox, bear), but the ubiquitous domesticated Angora goat is everywhere. The raising of stock is important in the region, but over-grazing in the plateau has caused soil erosion. During the frequent summer dust storms, a fine yellow powder blows across the plains. In bad years, stock losses can be high and swarms of locusts occasionally ravage the eastern area in April and May.

Anatolia has served as a bridge between the civilizations of Europe and Asia for thousands of years. Waves of different cultures have taken advantage of its central position, establishing cities and empires on this plateau. Site of the first large empire of the Western world, the Hittite Empire, the plateau was given its modern name of Anatolia (“Rising Sun”) by the Greeks. The capital of the republic of Turkey was moved to the Anatolian Plateau in 1923. The city of Ankara was chosen as the capital of the new state to remove it from connotations of the imperial capital at Istanbul, and to place it in the geographic center of the country.

Ten Regional Tastes: The food culture of a country is one of the elements that reflect its national character, its taste preferences, and most importantly its culture and lifestyle. One of the places where food culture holds great importance for Turks is the Central Anatolia Region. These ten dishes are considered the most famous and delicious ones from this region. 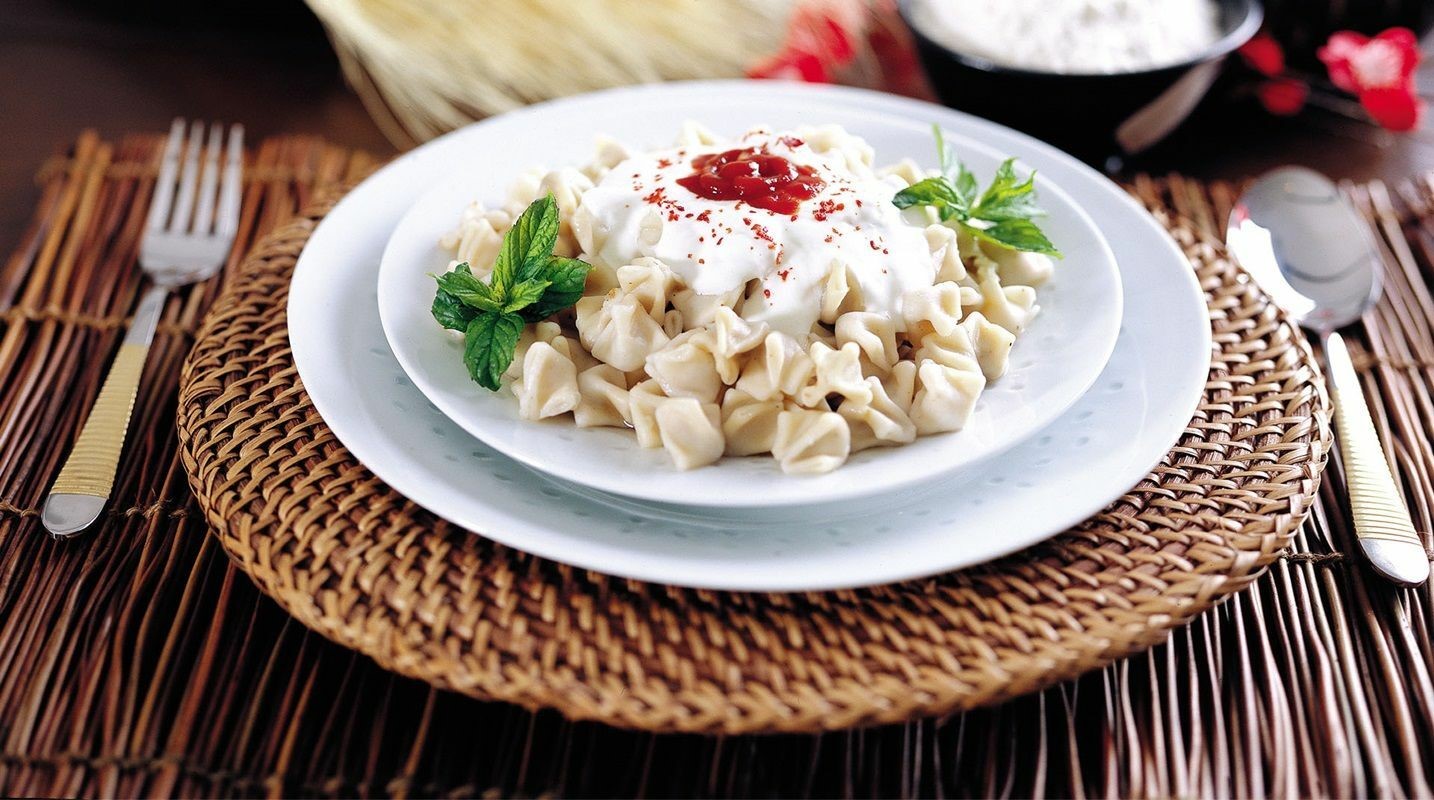 #1 – Kayseri Manti (Dumpling): Manti is the best-loved dish in Kayseri, as well as in all of the regions of Turkey. Manti dough is rolled out by hand. Its internal ingredients contain minced meat, onion and black pepper. It can also contain various other tastes and ingredients. Garlicky yogurt and various other sauces are used to garnish the dish. 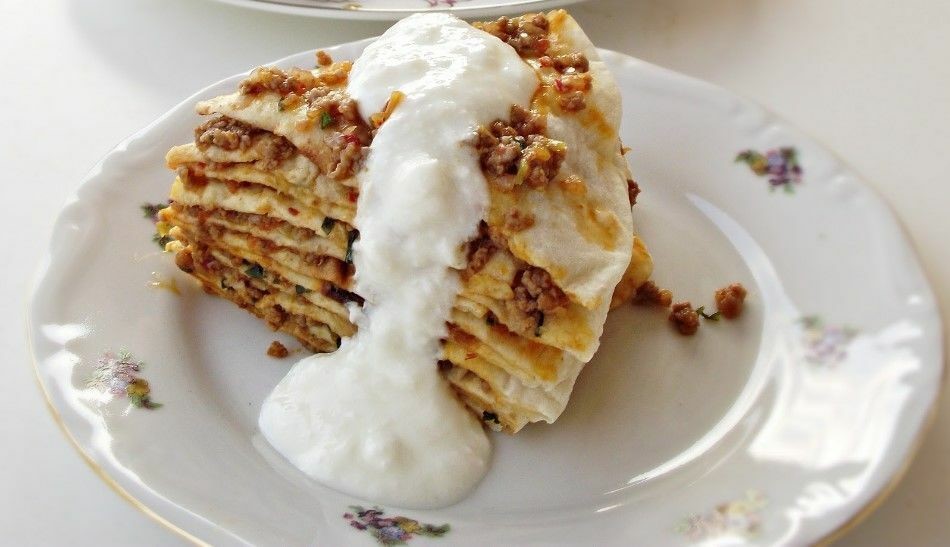 #2 – Yağlama: This is a dish peculiar to Kayseri province like Manti. Yağlama is also made of dough. Its taste is not limited to this region like many tastes of Central Anatolia, but it is well-known over all regions. The dough is leavened, rolled out, and both sides cooked in the pan. The internal ingredients of minced meat, onion and various spices are added to melted fat in the pan, and placed between layers of the Yağlama before it is served.

#3 – Ankara Tava: Ankara Pan Dish or Ankara Casserole is one of the most delicious and famous dishes of the region. It is prepared with sautéed meat, usually lamb, and grain-shaped macaroni. Veal can be substituted if lamb is not preferred. After the meat is cooked, it is served on top of the cooked grain. 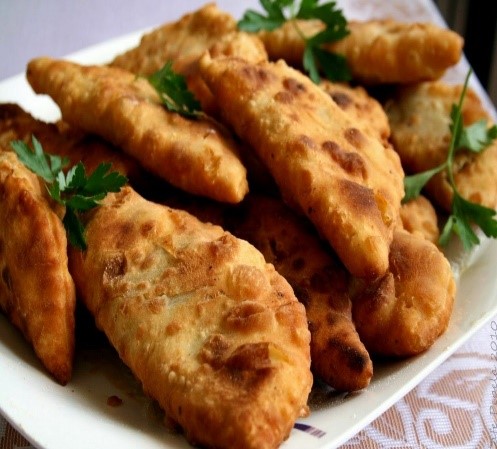 Çiğ Börek is peculiar to the Eskişehir area of Central Anatolia. It is a börek made with minced meat. It is different from other böreks as both sides are cooked in a pan rather than in the oven.

#5 – Keşkek: A traditional Turkish ceremonial dish made with lamb or chicken meat that is combined with wheat or barley stew. The mashed wheat or barley is placed in a bowl, followed by a sauce made with butter, meat broth, and pepper flakes, with the meat placed on top. It is traditionally served at wedding celebrations and religious holidays in the Central Anatolia Region. In 2011, the dish became a part of UNESCO’s Intangible Cultural Heritage of Turkey. 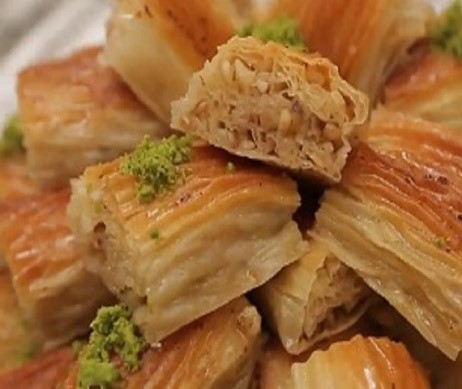 Gazete Baklava is a dessert peculiar to the Sivas region of Central Anatolia. It is a variety of baklava that uses walnuts inside instead of pistachios.

Various ingredients are used for the dough such as soda water, vinegar, melted margarine, yoghurt and lemon juice. 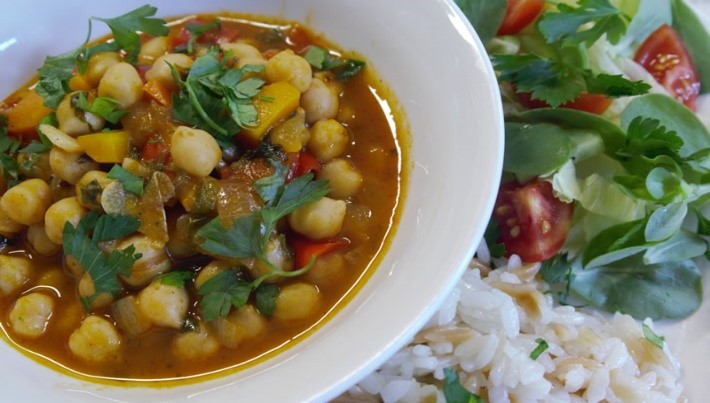 #7 – Chickpea Stew: This is a delicious dish peculiar to Konya province. Well-known, it is prepared with veal, onion, chickpeas and various spices. The main spice in this dish is known as a Baharat – a mixture of cumin, coriander, mint, black pepper, clove, nutmeg, cardamom, cinnamon, and paprika. 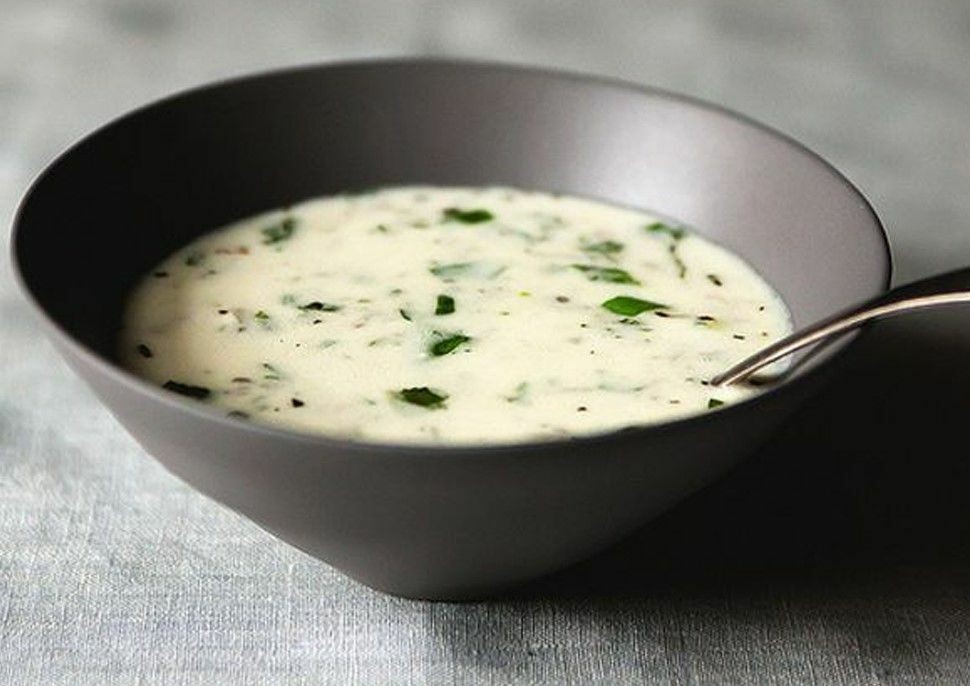 #8 – Kirşehir-Style Yogurt Soup: The yoghurt soup peculiar to the Kırşehir region has become a dish whose fame has spread because its availability is not restricted to the borders of its province. Especially prepared in warmer weather, the basic ingredients are chickpeas, green lentils and battering. Pepper, aubergine (eggplant) and tomatoes can be added to the list of ingredients which can make this even a more delicious and refreshing soup. 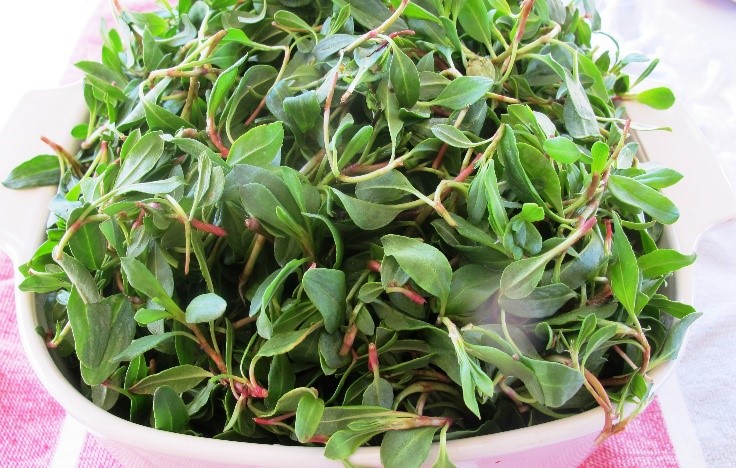 #9 – Madimak: A dish peculiar to the Yozgat region. Madımak is a perennial herbaceous herb, one of the most traditional, widely-known and edible plants in Turkey. It grows on its own, particularly in the Central Anatolia Region. Onions, peppers and tomatoes are roasted with the Madimak herb. Shortly before the dish is fully cooked, fine bulgur is added and mixed in and before serving, salt to taste is added. Easy to cook with, Madimak is also very healthy and delicious. To compensate for the increasing demand for it, farmers have started cultivating this herb in Central Anatolia. 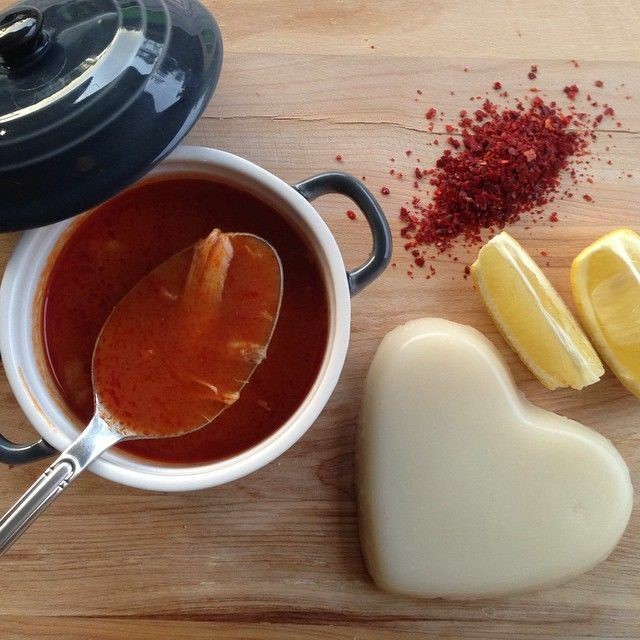 The soil and climate characteristic of each of Turkey’s seven regions naturally determines the foods that can be grown and produced there. The distinctive variety of products available to the various Turkic peoples living in these broad geographical areas has created the customs, traditions, and dishes that form the basis of the unique cuisine of each region. Along with enjoying the top ten dishes considered to be the most famous and delicious of the region as a whole, the many different variations on these dishes that one might find in the cities and rural villages, there are many tourist sites where visitors can enjoy the sights and sounds of the region.

Speaking of sights, on a purely personal note, this last picture reflects one of my most memorable experiences from a recent trip to Turkey, allowing me to check off one of the items on my “bucket list”. Hot air balloon rides are offered to tourists, to enjoy the unique sights of the ancient “fairy chimneys” of Cappadocia. The ascent is timed so the hundreds of balloons will be aloft and catch the exact moment of the sunrise! A unique experience and an unforgettable memory for any visitor to the Central Anatolia Region. 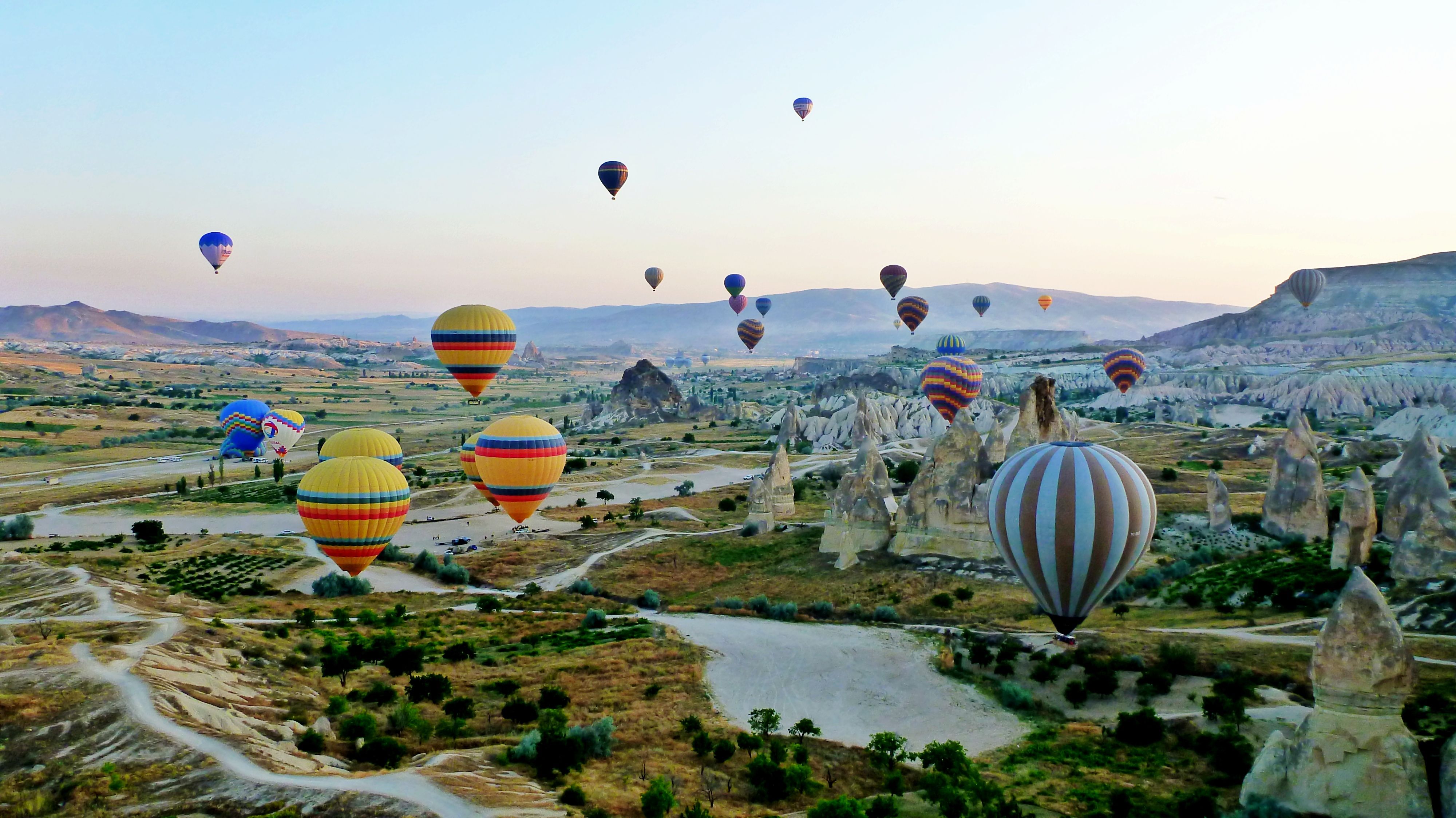 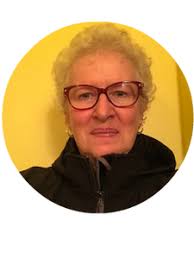 Author: Mary Bloyd is a retired corporate manager, living in Centerville, Ohio, USA with her husband. Mary loves cooking for family and friends. Taught by a professional chef how to use spices and herbs, make stocks and mother sauces, she developed a curiosity about all foods and cuisines. After discovering the wonderful storytelling of Turkish dizis and films, Mary became interested in and has written many articles about Turkish cuisine, traditions, and culture. Mary loves to travel, is a journal-keeper, writer of short stories and poetry, and is currently working on her first book, a personal memoir.