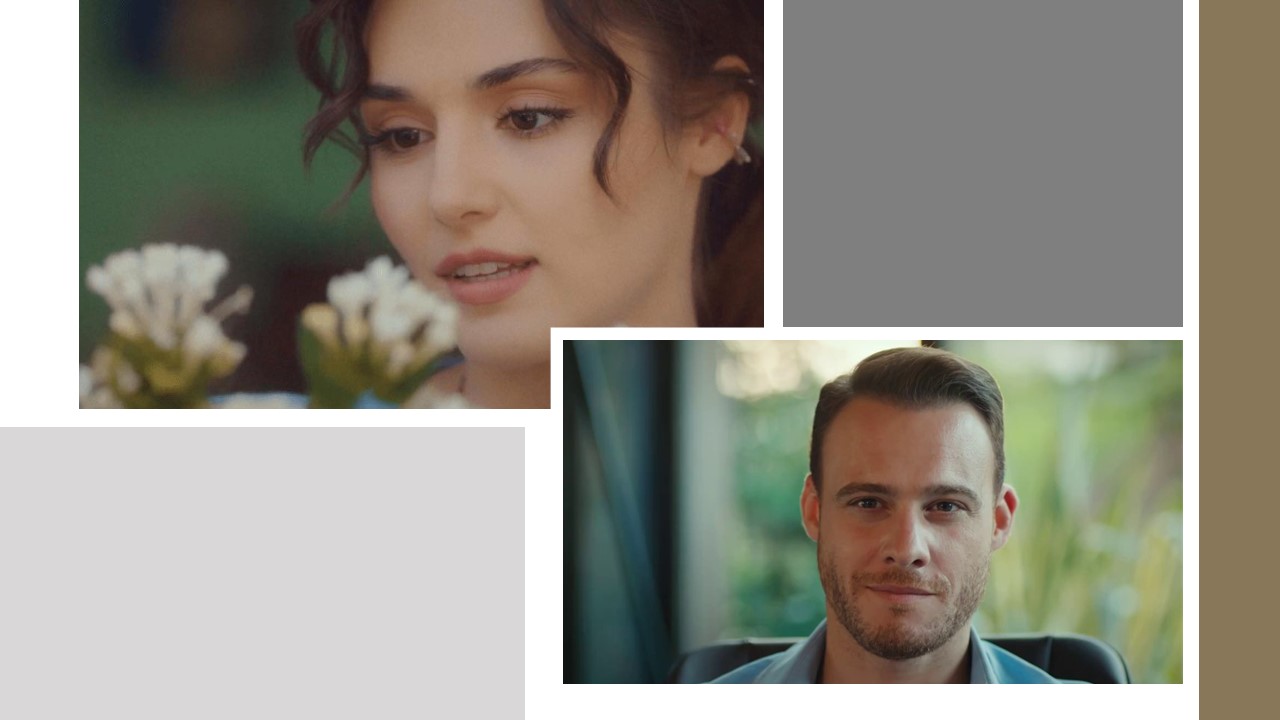 Every love story I have been touched by in my life has a magical component to it. The boy wasn’t supposed to be at the same restaurant that day when he met the girl. At the last minute, the girl took a different shift at her job when she met the boy. When the boy and girl do meet, they feel an inexplicable connection that transcends reason. It is as though unseen forces are busy working behind the scenes to make the two people fall in love. Some call this destiny. I call it magic. Veteran screenwriter Ayse Uner Kutlu’s new project, Sen Cal Kapimi (Knock on my Door), portrays the intricacies of this kind of magic that needs to happen for souls to collide. 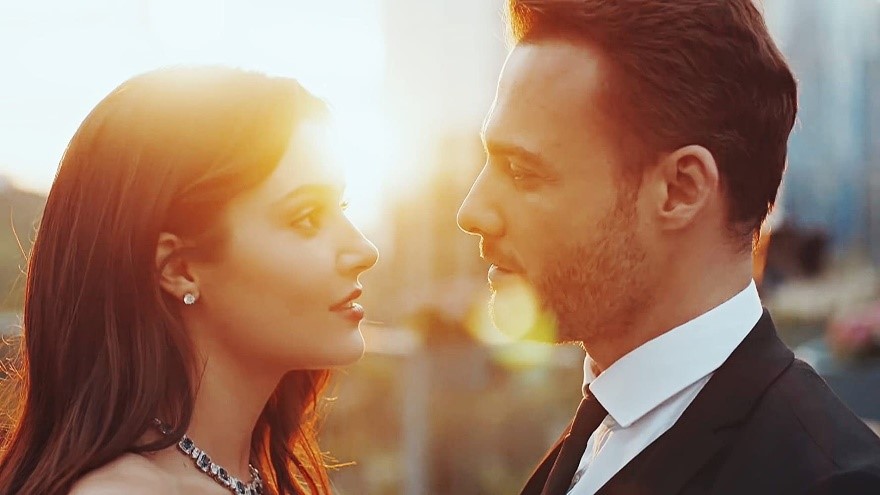 Eda Yildiz, played by the talented Hande Ercel, hates Serkan Bolat with a passion because she holds him responsible for cancelling her scholarship during her last year of school. With unknown family baggage, Eda (who is raised by her paternal aunt after being orphaned) is too proud to take money from her wealthy grandmother in Mardin. The two run a local floral shop where Eda works hard to make ends meet. Faced with the rare opportunity to heckle Serkan during a graduation ceremony for her friends, she does not hold back. Her anger and frustration unleash a series of events that end in her agreeing to pose as his fiance for two months or until his ex-girlfriend parts ways with her current beau, whichever comes sooner. 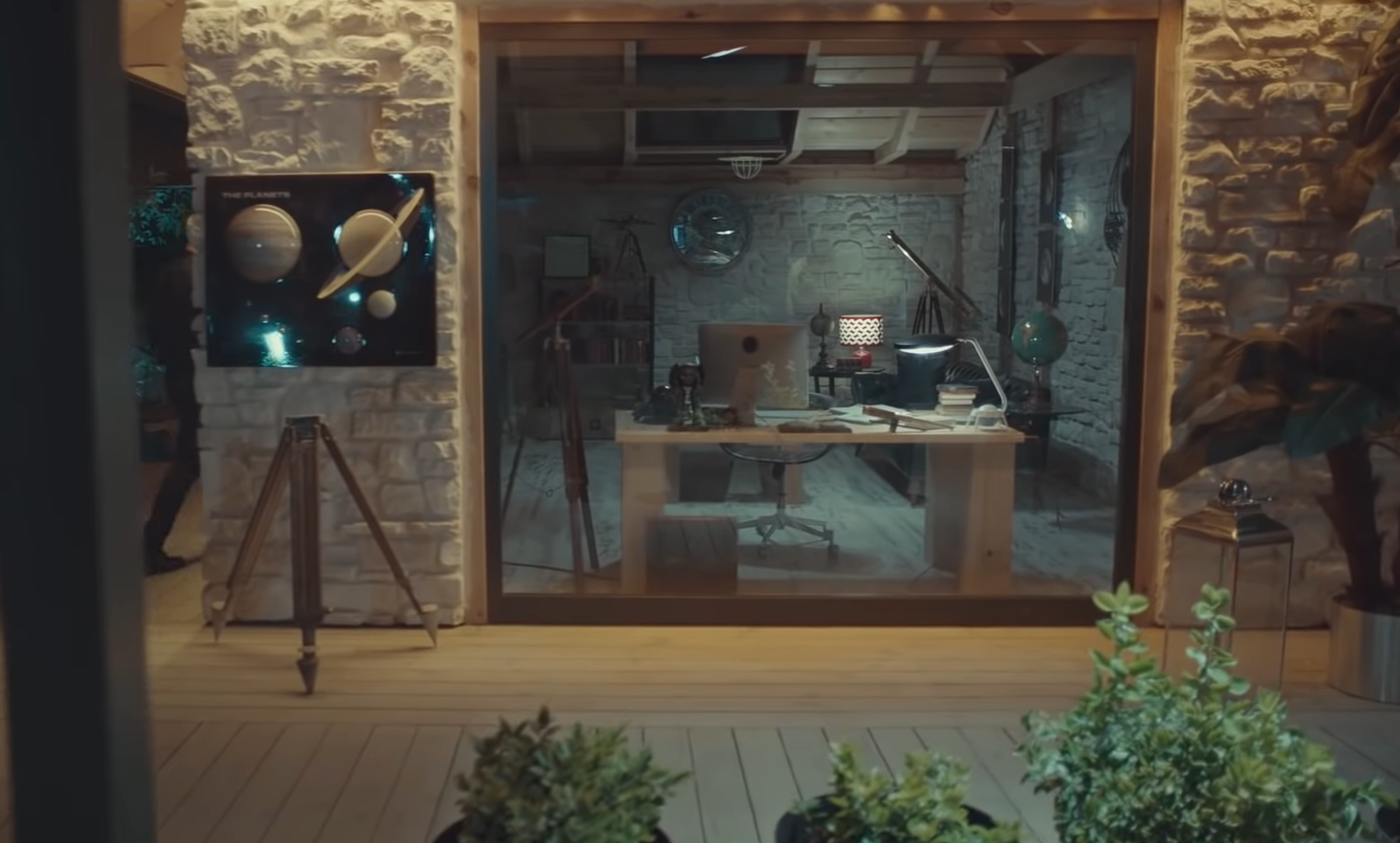 Kutlu is liberal with the use of symbolism in the plot of Sen Cal Kapimi, an example of which is Eda’s last name, Yildiz, which means star in Turkish, and Eda has a star tattoo on her right hand, which has some unrevealed connection to her family. The screenwriter is known for interweaving these types of details into the rest of the script to make the audience feel that the leading couple are meant to be soulmates.

Serkan Bolat, played by the multi-faceted actor Kerem Bursin, happens to love the night sky. He has a Bachelor’s and a Master’s degree in space and astronomy. Serkan studies the stars every night, and has a mural of Jupiter, Saturn and its respective moons outside his home office – a small, innocuous detail shown briefly during the first episode. When Serkan meets Eda for the first time at the graduation commencement speech, the dramatic entry of Eda emerging from the shadows and into the light momentarily catches the controlled Serkan off-guard with her spirited beauty.

One gets the impression that Serkan the seeker has finally encountered a most beautiful, rare type of star in the whole galaxy. One that is the culmination of the enchanting process of creation of the long-awaited star. He understands the science behind it well and he even describes it to Eda in a later episode as they scrutinize the stars together. He probably never imagined he would have an earthly experience that mirrored the same. 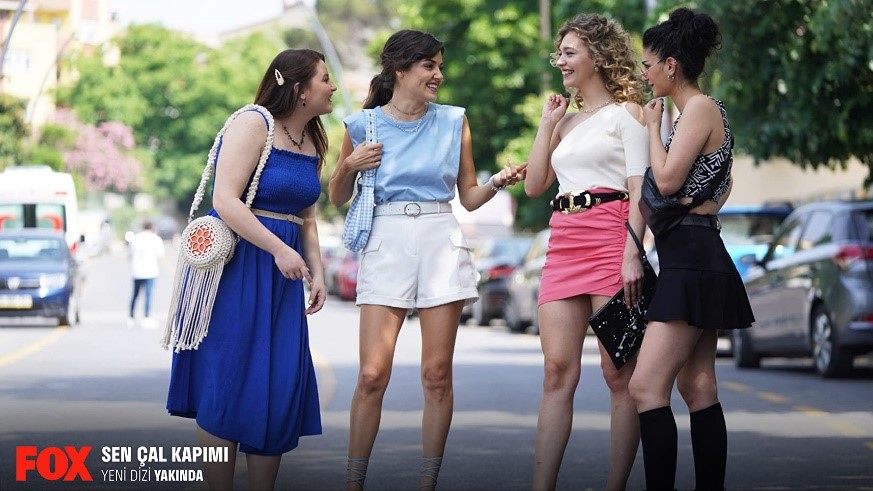 The slew of characters in the show play the balancing roles of either supporting or negating the relationship, showcasing the concert of forces that inadvertently bring two people closer together. Take for example, Fifi (Sitare Akbas), Melo (Elcin Afacan), and Ceren (Melisa Dongel), Eda’s girl squad who are more like Eda’s fairy godmothers. They are mischievous, loyal and very vocal. They are so loving towards their sometimes impulsive friend that a large part of their time in the first episode is spent with them running around Istanbul, trying to save Eda from herself. Despite Fifi and Ceren’s concerns, they are accepting and supportive of Eda’s abrupt decision to be engaged to her arch nemesis, conveying their trust in her choices. Melo, her closest friend, even says that Eda’s hasty choice to marry Serkan makes her believe in fairy tales and in the existence of true love.

Eda’s aunt Ayfer, played by Evrim Dogan, is another visible force that helps the couple even when she remains skeptical about the reality and success of this sudden pairing. Ayfer, like Eda, is a free and vocal spirit, who has raised Eda to be her own person, in charge of her own decisions. Her unconditional love for Eda is illustrated in her restraint when her niece decides to get engaged to someone she has only known for two days. Even though she is deeply worried and her every instinct wants to protect Eda from any further life wounds, Ayfer’s love is a glowing example and a contrast to the transactional, demanding kind of parenting Serkan receives from his biological parents. And, through these gently woven plots, we are shown that the force of unconditional love of the kind that Eda receives gives a person courage to explore new opportunities in a self-reliant way, while the lack of it (in Serkan’s world) can limit a person’s ability to see beyond the obvious.

Eda has no inner conflict with her decisions, no conniving plans to maneuver to her next win and there is a purity in her intentions. Serkan’s world is not as crystal clear, and the distinction between their two worlds is also shown in subtle but artistic ways. While Eda’s world is full of flowers and love, Serkan’s is empty and lacks connection, and the collision of the two is the cosmic experience we witness in Sen Cal Kapimi. The magical coincidences and a universe that moves in concert for these two souls to come together again and again make us believe that when it is meant to be, a path can forge towards a person’s true love. The kismet kind of love. The soulmate kind of love. 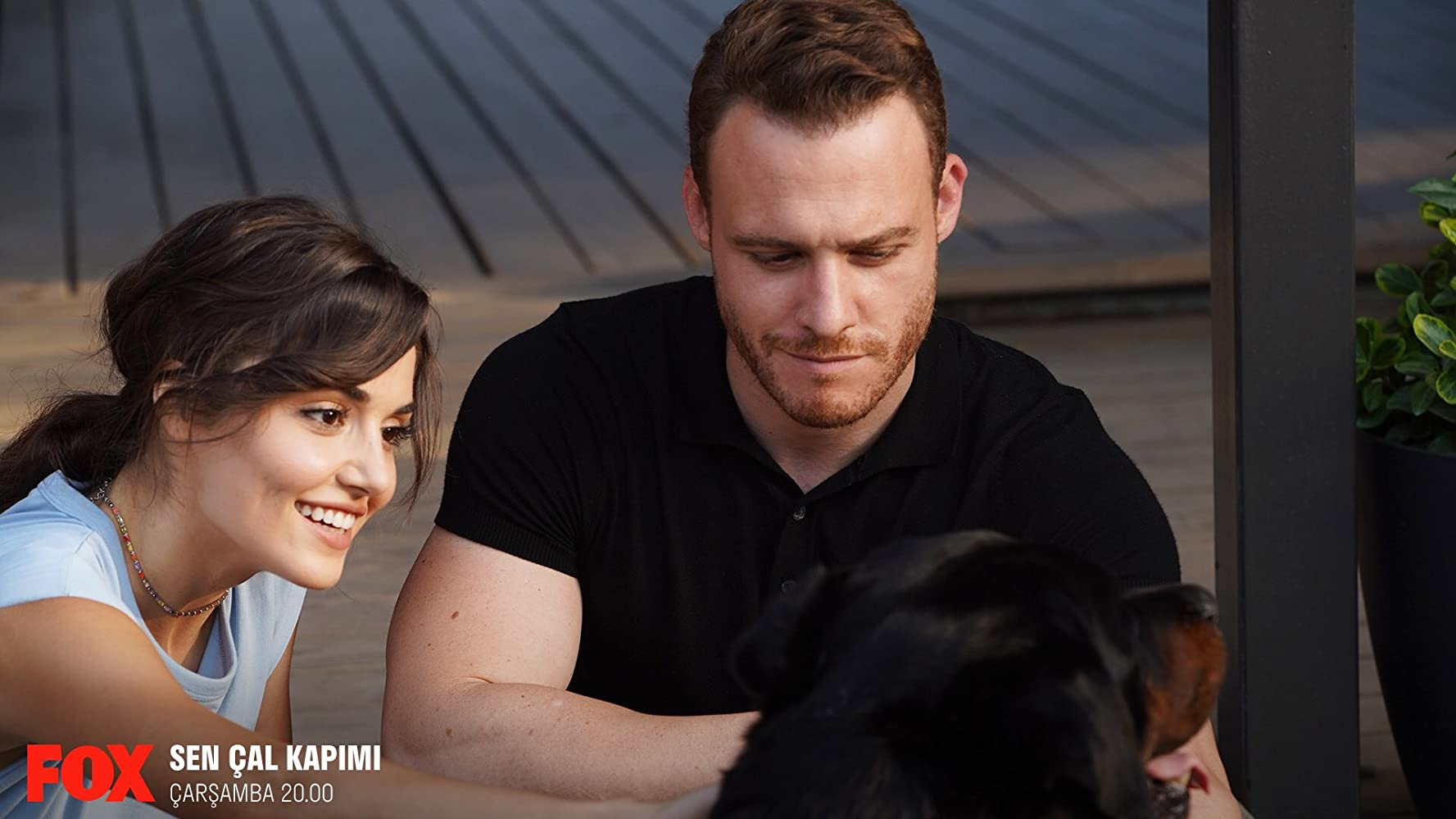 The most fated moment of the series so far occurs when Eda takes the place of her friend Melo as Serkan’s flight attendant. Both characters have parted ways at the end of a public and heated argument where Eda disparagingly tells Serkan that she does not want her scholarship back and wants no other occasion to cross paths with him again. There is no reason for Eda Yildiz and Serkan Bolat to ever meet again and yet they do. Melo needs someone to cover her shift as a flight attendant on a charter flight, which as fate would have it, is for Serkan Bolat himself. 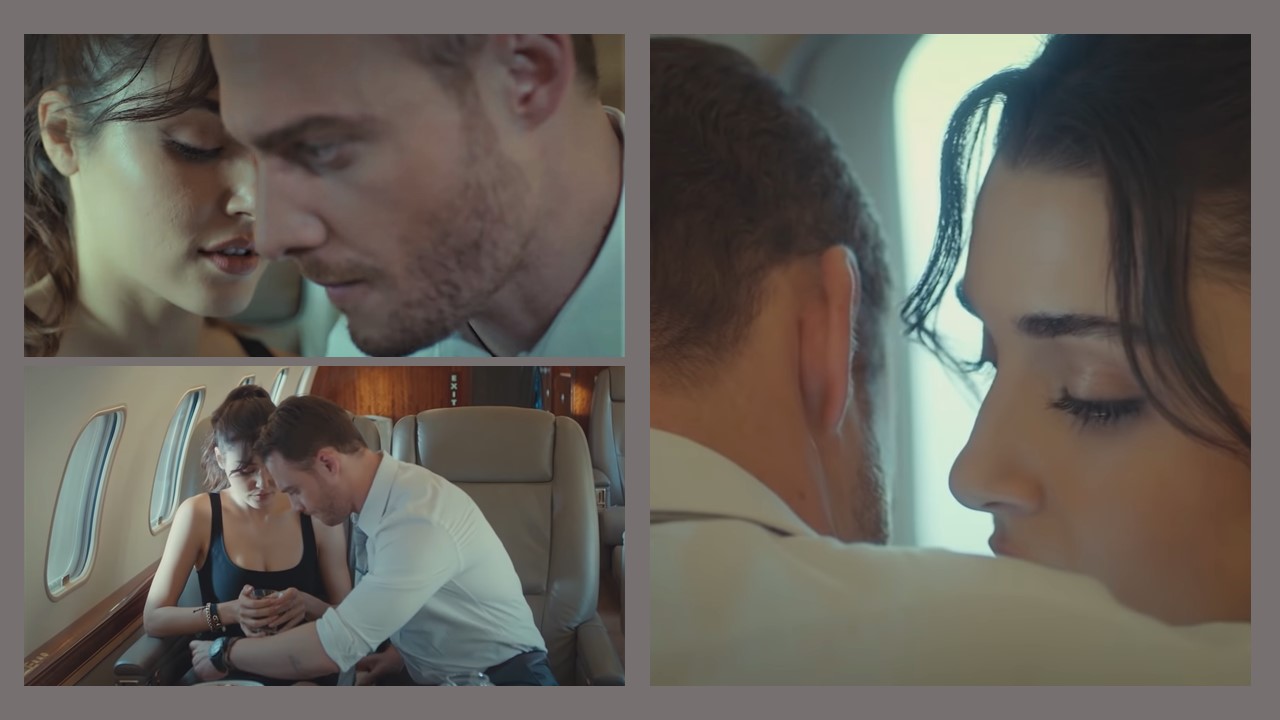 Eda is alarmed when she realizes Serkan is her passenger and tries to go into hiding in a small section of the plane. She starts to have a panic attack from her severe claustrophobia and that is how Serkan finds her. He was already aware that Eda has an aversion to small spaces and, instead of indulging in an indignant tirade, he focuses on calming her down. He kneels down, takes her hands while instructing her to breathe and once Eda comes to herself, Serkan takes her by the hand and sits her next to him. He even buckles her seat belt for her. Serkan’s small smile and looks betray his joy at finding himself with this intriguing girl again. As their encounters continue and deepen, the interplay of their characters and actors give way to a passionate chemistry that is breathtaking.

The show boasts a talented cast. Hande Ercel does a wonderful job portraying the feisty and outspoken Eda. The audience can feel both the vulnerability from her life’s disappointments and her fierce determination to rise above them. Kerem Bursin as the controlled and ambitious Serkan, who is trying to navigate his own sets of life constraints, also interprets his role with aplomb. Eda’s trio of friends, her aunt, Serkan’s mother, the office staff are all excellent in their roles, to the point that no skits feel like filler scenes. The comedy is subtle and the poetic ways in which the growing passion between the protagonists are portrayed is Kutlu at her best. A special nod to Ahmet Mark Somers (back in his role of a father at the head of a holding), who is almost unrecognizable from the bearded, wise Papa Divit in Erkenci Kus. The colors, set design and scenarios lead to a visual spectacle that enchants the audience during and long after its viewing.

Sen Cal Kapimi is excellent at showing us a magical tale about meeting our soulmates. Serkan’s love for the stars and how it relates to Eda’s last name Yildiz makes us believe in their intertwined destiny. The fairies on the show (the girl squad, her aunt, his mother’s assistant Seyfi, his dog Sirius) make us feel that the strength of the visible and invisible forces that help two people fall in love lies in the power of pure intentions. The symbolism and how naturally a passionate love can blossom between two unlikely people  makes us feel hopeful. It reinforces that every path we choose could lead us down to the love we deserve. The show artistically portrays that finding our destiny can be a magical process that requires coincidental moments, loving support from the people around us and a tad bit of fate. And, in so doing, the show has established itself as one of the top shows for the summer, garnering a growing global fan base that may cement its reputation as one of the best Turkish romantic comedies of recent times.

All video clips and photos belong to their respective owners. No copyright infringement is intended. Please ask for permission before reprints.

• P E R S P E C T I V E ~ During #domesticviolenceawareness month of October #yenihayat opened the door for an important social dialogue. The narrative around domestic violence can only change when everyone come together and work together. Read this insightful piece on this thought-provoking topic •

• P E R S P E C T I V E ~ A fun piece by a native Turkish dizi watcher, sharing her thoughts on how “The unifying power of the visuals and sound blend together in harmony, amplifying the effect when it is a song by a famous singer.” •

• T R A V E L ~ #ishakpaşasarayı #ishakpashapalace is a gorgeous destination in Eastern Turkey, seen on the layered dizi #Hercai. Read this informative piece on the Splendor of the structure! •

Will Serkan reveal the truth?

How will our star-crossed lovers find their way towards each other again?